As the world continues to evolve to one that is increasingly digital, data security is more important than ever before. Both traditional and ecommerce customers want to know that their cardholder data is safe during a transaction, and it is the responsibility of merchants, payment processors, and banks to ensure that their information remains secure. So, how can this level of assurance be accomplished? That’s where tokenization comes in.

PCI SSC has enacted the PCI Data Security Standard (PCI DSS), which outlines 12 measures that merchants and organizations should take in order to protect cardholder information, including:

PCI SSC is a global forum that brings payments industry stakeholders together to develop and drive adoption of data security standards and resources for safe payments worldwide.

The Council was founded in 2006 by American Express, Discover, JCB International, Mastercard, and Visa Inc. Founding members share equally in ownership, governance, and execution of the organization’s work.

China’s UnionPay is considered a Strategic Member and sits on the Council’s Executive Committee.

This information can be used to identify or trace the identify of a specific individual and includes:

How Does Tokenization Work?

During the tokenization process, the sensitive data (customer payment or personal information) remains “tokenized” until reaching the token vault.Once in the token vault, the token data is replaced with the actual data and sent to the issuer for authorization.

Primary Account Numbers, also known as payment card numbers, are found on debit and credit cards. These are typically 14, 15, 16, or even 19-digit numbers used to uniquely identify different payment cards.

During the digital tokenization process, algorithms are used to convert PANs into a string of random digits, which provides security in the event of a data breach.

Card Verification Values are a series of numbers embossed or printed on payment cards, and are typically used for “card not present” transactions where a PIN cannot be manually entered.

In payment network tokenization, tokenization most commonly refers to the conversion of a customer’s PAN data into tokens. There are typically two forms of PAN tokens: “network tokens” and “merchant/acquirer/gateway” tokens (merchant tokens for short).

Merchant tokens are typically used for security purposes, such as storing data in an analyzable form without storing PII data.

Network tokens are defined by EMVCo as “a surrogate value that replaces a primary account number (PAN) in the payment ecosystem.”

There is, however, one exception. Networks that exist outside of EMVCo may not be able to receive or process network tokens, which could be a potential concern for debit routing capabilities.

Currently, network tokens are typically used with digital wallets, such as Apple Pay, where a network token is created during the card provision process. Some acquirers offer merchants network tokenization solutions, which can be used to facilitate agreements with EMVCo card networks. There are EMVCo solutions like Click to Pay that leverage network tokens as well.

Outside of accepting digital wallet solutions, however, merchant uptake among solutions offering network tokens has remained low, according to CMSPI insights.

Why Tokenization is Important for Merchants

Tokenization provides merchants with an array of benefits, including:

If you take payments, establishing PCI DSS compliance is crucial, as failure to do so could result in fines or serious security breaches.

PCI DSS tokenization ensures that any organization accepting, transmitting, or storing payment card information is minimizing their footprint of sensitive data, as they are simply handling tokens instead.

Not only does PCI tokenization/PII tokenization help guarantee that you meet compliance requirements, but it can also result in faster audits.

Speaking of audits, discover how an invoice audit could save you millions!

Tokenization improves the customer experience and merchant service perception by adding the element of convenience.

Given that a token is associated with a customer’s mobile wallet, additional details are automatically (and safely) added upon checkout of a pinless transaction online.

Because tokenization is an automated process that happens instantaneously, it eliminates the need for outdated, drawn-out security measures for transaction confirmation.

Tokenization solutions provide an added layer of security to both online and offline transactions by removing the need for businesses to capture and store sensitive information, making it an essential component of an effective merchant fraud strategy.

Ever wonder if merchants are building successful fraud toolkits? Explore our survey results.

Tokenization and encryption are simply two different types of cryptographic methods that have the same goal: data security.

That said, there are some notable differences between the two safeguards:

It’s important to note that tokenized data can be returned to its original value through a process known as detokenization.

As the name suggests, detokenization is the reverse process of tokenization, and can typically only be performed by the same data tokenization system that the token originated from.

As discussed above, there are generally four stakeholders that can generate tokens:

The graphic below illustrates the different points in the supply chain wherein tokenization may occur:

The process of determining the approach to tokenization can be challenging for a merchant, as each method of tokenization comes with its own considerations. Merchants should consider their unique needs and the various features of different tokenization methods.

The table below briefly describes these considerations for the various tokenization types. 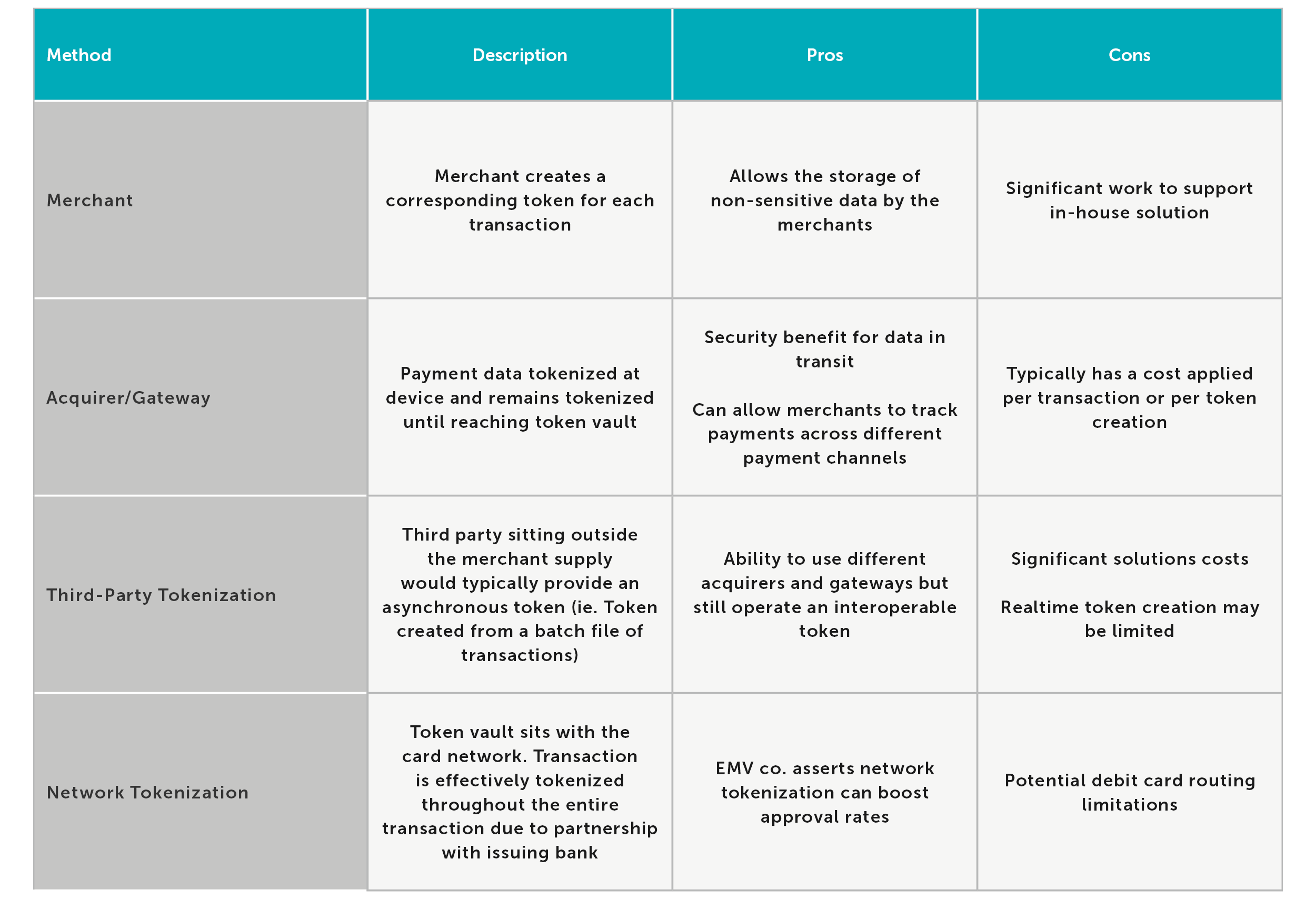 In summary, data tokenization solutions ensure the security of traditional and digital payments.

Businesses that prioritize tokenization reduce their risk of data theft, build trust with their customers, improve compliance, and open doors to payment innovation.

In a world where everything is getting more digital, tokenization future-proofs companies and safeguards the financial interests of customers.

Stop Fraud Before It Happens

Want to learn more? Get in touch with us! While you’re there, be sure to check out our fraud minimization services to see how we can help.