In the last three months, some of the largest U.S.-operating fintechs and payments suppliers have posted some unfavorable headlines: thousands laid off at high-growth processors,1 millions in valuation slashed due to financial hardship and looming recession,2 or full business restructures due to consistent unprofitable growth. Many firms point to waning ecommerce growth,3 looming recession, and heightened interest rates as catalyzers for the downturn.

However, many merchants may be wondering: how significant has the drop in ecommerce been? How are firms responding to the new economic climate and how can I re-align my cost and resourcing strategies accordingly? CMSPI’s economist breakdown a few of these questions to help merchants navigate some of the tumbling on the fintech stage.

Flattening of ecommerce and retail growth

Estimates on the ecommerce share of retail spending can vary widely, but most signal a clear trend: online spending growth is flattening. For example, ecommerce as a share of retail spending was estimated at 15% in Q3 2022 by a US Census Bureau Monthly Retail Trade Survey, just three percentage points above pre-COVID levels, and down over 1.5 percentage points below the peak in Q2 2020.7 The pattern isn’t just restricted to the U.S. either: reporting from the British Retail Consortium shows that ecommerce spending fell from 49% in 2021 to 40% in the first eleven months of 2022.8

CMSPI estimates show a similar story. For apparel merchants, pre-COVID ecommerce spend jumped drastically from about 20% of spending to nearly 50% at peak-COVID, only to drop to about 30% based on preliminary 2022 data.

Recent data from Visa also indicates a narrowing of overall retail spending, posting only 9% growth in U.S. payments volume for the first three weeks of November, compared to a 10% growth rate in October, and 21% growth rate at a peak in February.10 In addition, examining data from the Visa Spending Momentum Index (Figure 2) it’s clear that as of November 2022, spending momentum is trending below pre-COVID levels, suggesting not a return to “normal” but rather, a dip below pre-COVID spending this time of year.

What does this mean for merchants?

Costs of acceptance may be rising 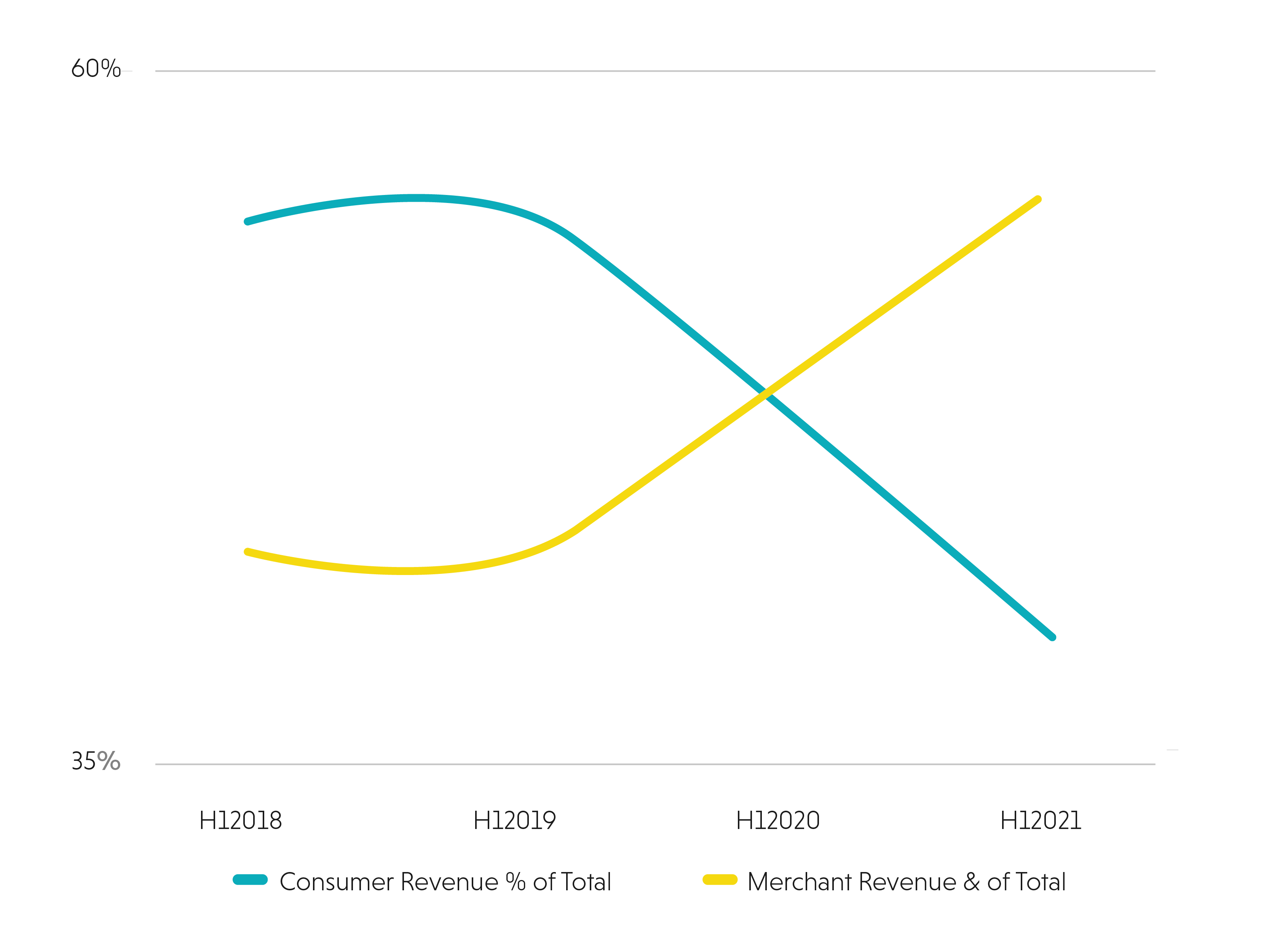 Wyingly, there’s an expectation that these fee increases may not be limited to just BNPL providers. Ecommerce spend tends to attract higher card fees on average: in fact, CMSPI estimates that ecommerce card fees are typically far higher than in-store transactions, and this pricing dynamic was present even before the fee increases of 2021 and 2022. From Q4 2018 – Q4 2019, ecommerce volumes rose 15%, according to the U.S. Census Bureau. A few months later, in early 2020, the networks announced increases to ecommerce fees that CMSPI estimates cost merchants over $1 billion annually. As ecommerce spending has fallen slightly from its peaks during COVID, issuer margins on interchange and network revenue streams from ecommerce fees may shrink. As a result, card fees on average may decrease slightly, but this is no reason to expect the supply chain to remain dormant. There’s a concern that the falling margins on ecommerce fees may incentivize pricing strategy to turn to in-store  volumes, creating fewer opportunities for merchants to navigate and mitigate cost increases.

How to keep up with shifting costs and channels

Will the next year represent a shift back to in-store? Has your organization over-resourced online payments acceptance expecting ongoing growth? These are some of the essential questions that merchants will be wrestling with as they strategize for 2023 and beyond. With regular changes to pricing, it’s even more important to stay vigilant as the volume of high-margin ecommerce fees ebbs. In addition, merchants with fintech partners may see their revenues threatened as settlement timescales may not be able to keep pace with the tumbling on the fintech stage. There are potential short-term opportunities with the drop in ecommerce spending, but long-term, the rippling effect across fintechs, issuers and networks may pose looming threats to cost efficiencies and revenue recoupment for merchants, who must monitor their supply chain relationships for durability and efficacy while re-aligning CNP strategies to account for shifting volumes.

Connect with Christian on LinkedIn

Get in touch to optimize your payment acceptance costs