Have you ever asked the following questions?

If so, you’re asking the right questions, and you’re not alone in wanting answers. Some of the largest merchants around the globe struggle with reducing card fees, maximizing transaction success rates, and minimizing fraud and chargebacks. But frankly, if you’re struggling, it’s not your fault: payments are inherently complicated, and even some of the savviest merchants may only be able to identify the ways they are losing loyal customers or paying too much, without having the data or resources to identify the source of these challenges. As a result, most merchants miss optimization opportunities, and may be leaving seven-figure savings and eight-figure incremental sales on the table. This blog will highlight the fundamental features of the payments market that make optimization so complicated and offers top tips into how merchants can ensure they’re efficiently maximizing payments.

In the U.S., there are over 1,000 possible interchange rates that merchants could be paying monthly. The card networks maintain almost 200 different interchange programs, each of which can have anywhere between three to eight interchange rates that will vary based on a variety of factors including issuer location, merchant industry, and card entry method. While interchange is one of the largest fees per transaction, it represents only one of three main fees that merchants pay per transaction to accept card.

Network fees, for example, don’t make the game any easier to understand. These per transaction fees (or sometimes per location, per authorization, or per decline) can change so fast that most merchants may not be able to keep up: since 2010, more than 40 network fees have been introduced or increased for U.S. merchants, resulting in billions in cost increases (Figure 1).¹ The ballooning of fees is not just isolated to network fees: interchange fee increases in the last three years alone have resulted in over $1 billion in cost increases for U.S. merchants.²

Lastly, processor fees are going to vary wildly between merchants, as merchant features like transaction volume, ancillary products, portal access, and bundled services influence the size of the processor’s per transaction fee. Navigating this complexity is challenging – and even once you’ve got it down, processor overcharges can leave you paying more than expected. In CMSPI’s experience, we find at least one error in one of every two invoices we audit. 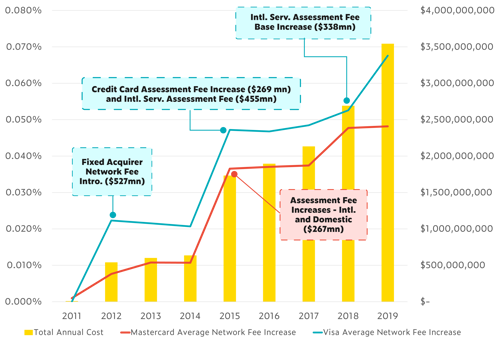 Trying to understand these fees is a tough task – even harder is strategically using the available tools to reduce them. Businesses today are experiencing more pressure than ever to keep costs down, but even the savviest merchants are struggling to fully achieve savings from an optimized approach.

With data in your arsenal, your business can identify and isolate problematic fees, whether those come in the form of overcharges from your processor or new network fees levied by the card networks. Once your cost profile is clear to you, getting your rates to market-leading levels will require cross-industry and cross-supplier benchmarks.

Challenge 2: Cost is just one part of the payments puzzle

For most merchants, reducing the cost of card acceptance is going to be their top priority with respect to payments optimization. But there’s so much more at stake than cost reductions. Merchants may be losing out on millions in revenue if they’re not regularly monitoring approval rates across their payments partners and payment methods, for example. In addition, businesses today are unknowingly losing loyal customers due to inefficient fraud rules or payment partner restrictions, and an excessive number of false declines can cause loyal customers to shop elsewhere. In today’s world where achieving growth can be such a challenge for so many businesses, the last thing your business needs are lost customers due to payments supply chain inefficiencies.

What’s an approval rate, you ask?

An approval rate is the percentage of a merchant’s transactions that successfully pass through the authorization process with an approval. An approved transaction will result in the customer’s funds transferring from their account to the merchant’s. Typically, instances of insufficient customer funds or fraudulent attacks will generate ‘declines’ and will lower the merchant’s average approval rate. Increasingly, however, overly stringent fraud rules or payment partner practices are causing a higher number of declines and false declines, leaving many merchants with unnecessarily lost sales.

Merchants can’t achieve full cost savings if they’re not maximizing the approval rates and minimizing the chargebacks on those preferred payment methods. The synergies across these three pillars of payments can generate serious benefits – in CMSPI’s experience, benefits to the tune of seven- and eight-figure in savings and incremental sales.

The last thing merchants want are abandoned carts as a result of not accepting a customer’s preferred payment method. This fear can lead many merchants to overload their checkout with APM logos to the point where it resembles a NASCAR auto more than a checkout. If merchants are accepting as many payment methods as possible, they could be missing out on the efficiencies a more data-driven approach could deliver. In the age of digital wallets; digital cards; digital banks; cryptocurrencies; buy now, pay later; and even buy now, pay now, there’s a likelihood a lot of merchants may be overwhelmed by the wealth of choice.

Each APM can be optimized across cost, fraud, and approval rates, and merchants should be strategically considering how their transaction volume can influence APMs to come to the negotiation table.

Reporting capabilities by network, acquirer, and APM may all differ, making a harmonized payments strategy challenging to even baseline. While your business may have access to the data required for optimization, there are time- and resource-intensive processes involved in even getting the data in a comparable, analyzable format. Without standardized datasets, merchants will have limited visibility into performance, and may be left to accept their lot.

Once you’ve received all necessary reporting documents, standardize data to evaluate and compare performance. With the dizzying number of APMs and fees that merchants have to juggle, establishing standardized cost tables increasingly requires the use of technology that can efficiently analyze and report key trends and opportunities.

No matter how robust a payments strategy may be, without a payments partner that has the right tools, capabilities, and incentives to support, that payment strategy will be as useful as a sheep dog on Fifth Avenue. In addition to the potential limitations of payment partners, card network products can make optimization challenging to maintain. For example, network tokenization tools, while potentially delivering approval rate and interchange benefits, may severely impact the control you have over debit card costs and the customer insights on which your marketing team relies. As a result of red-hot M&A activity, rapidly changing processor capabilities, and network products that can change business-as-usual, merchants must constantly monitor market developments and routinely review their payments strategy.

Threats and limitations to optimization can cause your once cost-minimizing and sales-boosting strategy to lose serious strength. Networks, acquirers, and issuers all play a role in your payments supply chain, and each wants the largest portion of your cost per transaction.

How Can CMSPI Help?

Payments are complicated, and most businesses have insufficient time and resource to truly optimize. This can result in huge seven-figure savings and eight-figure savings and sales left on the table. In addition, you may be turning away loyal customers if you’re not optimizing across all payments partners.

As you’ve got enough on your plate, leave the payments optimization to us.

CMSPI 360 will be your solution for a harmonized and optimized payments strategy. Through data, transparency, and collaboration, CMSPI can support your business in achieving more sales for lower costs. Our in-house data and payments experts will identify significant inefficiencies across your estate, focusing not only on your cost of processing but also your approval rate and fraud performance. We’ll holistically fix your payments issues by partnering-up and integrating our army of experts to your team.

Please reach out to learn more and to get a free payments assessment, showing where you’re losing money through your payments supply chain.

Optimize your arrangements with our payments experts

Connect with Christian on LinkedIn